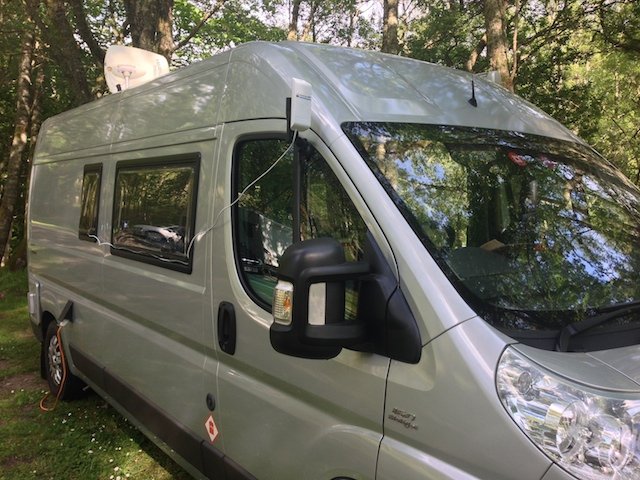 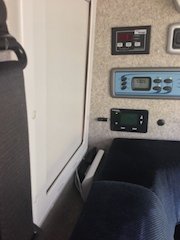 Antenna stowed away when not in use 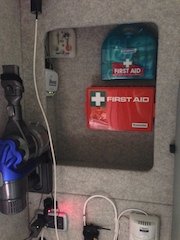 I have the iBoost Directional Pro 8 semi permanently installed in my van and can vouch for the fact that it works satisfactorily on CC sites allowing both Marilyn and I to have our individual iPhones and iPads connected simultaneously. I originally purchased the system at the NEC in October 2013 as we have BT at home so can use BT Openzone/Fon and have since added a 12mth sub to the CC wifi service. I decided on the directional model due to what I saw as the double benefits of the additional range at a lower cost. On our current trip around Scotland and the inner isles we have been able to successfully obtain connections from BT sources provided we have a reasonable line of sight view of the source but even if we have been too remote to get any signal once we visit Mr Tesco it does save having to hover in close proximity to the entrance of the store to get an internet fix. One of us can do the ‘admin’ in the comfort of the van while the other does the provisioning.

My semi permanent installation has the router/booster permanently mounted in the rear of the wardrobe with a dedicated 12v outlet. The cable for the directional aerial is then lead through a gap in wardrobe wall at the bottom of the shelf under the small window and the cable plus antenna lie there while the system is not in use. When the aerial is in use and needs to be positioned externally I lead the cable out through the small window.

In summary I would say that the device has been of use more often than not when using wifi hotspots on camp sites either because of the service being restricted to a single device at a time or restricted signal coverage/strength. Which together with the extra chance of being able to use BT as an alternative to an individually purchased service has meant it was a worthwhile buy for me.