The shower has never drained very quickly in our Morocco and recently it has become so slow it was quicker to use a J-cloth to empty the shower than to wait for the water to drain away.  After reading somewhere that there is a one-way valve in the shower drain I decided to look for it and see if this was the cause of the problem.

To get to the valve it is easiest to remove the whole pipe. One end of the pipe is fixed to the underside of the shower tray with a normal sink drain fitting. 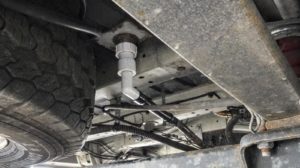 The white knurled “nut” at the top was only hand tight and could be unscrewed fairly easily. However, I found I did not need to remove it as the bottom fitting was just a push fit into it and so this end of the pipe could be released by just pulling down on it. I am not sure if it shouldn’t be glued in, but ours wasn’t. If yours is glued then you will need to unscrew the nut. I found it easiest to access this end of the pipe from the rear of the vehicle but I then had to switch to the side for the rest of the task.

The pipe itself was secured by three zip ties which I cut. The pipe could then be bent so that it could be easily accessed from the righthand side of the vehicle. The one-way valve is fitted (on our vehicle) mid-way along this pipe. I did not attempt to remove the pipe from the tank – it seemed very well secured there so I left that joint alone but pulled the one-way valve off the lower pipe, which left me with the item shown below. 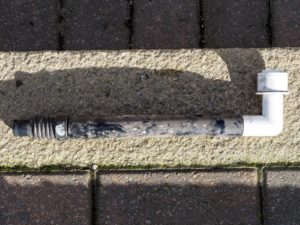 The one-way valve is on the left.  Here it is in close up. 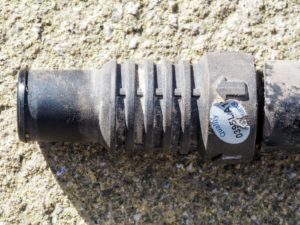 The valve had quite a lot of “gunge” inside it and I was hopeful after cleaning it all out it would work better. It didn’t. Trying to run water through the pipe resulted in only a trickle of water. So I decided to make the one-valve a two-way valve. Seizing a pair of pointed pliers I inserted them into the valve from the waste tank end, grabbed the rubber insert and pulled it out. What emerged looked like this.

If this isn’t called a Whoopee Cushion valve it should be. I thought perhaps the rubber had become hard with age but it seemed fairly soft to me.

I have reassembled everything without the Whoopee Cushion device, fitting new zip ties and the water drains very quickly now but there are two potential problems created by removing the valve. Firstly, there is nothing to stop smells coming from the tank but more importantly there is nothing to stop waste water flowing back, especially when driving uphill with a full or even partially full tank. The solution is to ensure the shower drain is closed from the inside by pushing down the chrome “plug”. We haven’t fully tested this yet but it looks as if it will work.

An alternative approach would be to replace the valve with a new one. I found on-line a Whale non-return valve for a 19mm pipe looked more or less the same as the device currently fitted.

Postscript:  Three weeks into a trip through France using a lot of aires I can say this mod has been an almost unqualified success. The water drains away extremely fast just as you might expect with a domestic shower. A trick we’ve adopted is to shower with the plug closed so water pools in the shower tray. This gives your feet a good soaking! Then at the end a quick dab with the big toe to open the plug and the water quickly drains away.

The qualification “almost” is we did get some back flow when we forgot to close the plug and left the carpet in place. This was at a France Passion site with no waste draining facilities. The trick is to take the carpet out if we need to drive with waste in the tank. This ensures you can see if the plug is open and the carpet won’t get soaked if there is a leak. With leaving the carpet in place it is too easy to stand on the plug and open it – which is what happened to us I think.

We have had no problems with smells but I do add a Dometic Power Care Tab to the waste about once a week.